What Makes Chubby So Special?

What makes ChubbyTM so special?

In 2012, Jonathan Hjelmervik recognized the need for a livestock supplement that addressed several areas of animal performance, as existing products on the market were focused on a single performance area causing the need for several supplements. At the time Hjelmervik was working in the commercial livestock feed industry, and decided to combine his animal nutrition expertise and long-time involvement in the livestock showing community to develop a single product that could be used in place of several.

The StandAlone Regular product line is a liquid product which targets appetite, hair coat, joint and hoof health, muscle and fat development, and fertility, with cattle, sheep, goat and swine variations available. The product is designed to improve and maintain animal condition year- round and has been recognized in the crowning of numerous champions across the country since its inception.

ChubbyTM was developed as an additional tool for StandAlone Regular users. Produced with the same great mineral, vitamin and yeast package as all StandAlone products, the ChubbyTM line is a high energy supplement designed to boost animal performance over a shorter time period.

So, what makes ChubbyTM so special?

ChubbyTM uses a new blend of 4 sugars and Rice Bran oil. While most livestock supplements on the market rely on commodity grade molasses as a source of sugar, ChubbyTM has little molasses content, and three sources of human food-grade sugar. By switching from the sucrose found in molasses for fructose and glucose, Hjelmervik has improved the ability for livestock to process sugar efficiently. Fructose and glucose are single units of sugar, called monosaccharides, and are the two sugars that make up sucrose, which is a

Rice bran oil has long been recognized as benefitting muscle development in livestock, and is high in Vitamin E and Gamma Oryzanol.

Hjelmervik sees ChubbyTM as the product of choice for owners who want to boost their animal’s performance but don’t have the luxury of time. In particular, he sees a great application of the product in the sale preparation of show livestock. ChubbyTM can be used to complement usage of StandAlone Regular – users can feed ChubbyTM to reach ideal body condition, and then switch to StandAlone regular to maintain that level of performance.

ChubbyTM is already outperforming the expectations of Hjelmervik – trial participants have reported ChubbyTM is helping hydrate muscles, increase bloom and shape, all while improving condition. It has produced a number of champions from the group of users who trialed the product earlier this year – a testament to Hjelmervik’s ethos of making the best product available, not the cheapest to produce. 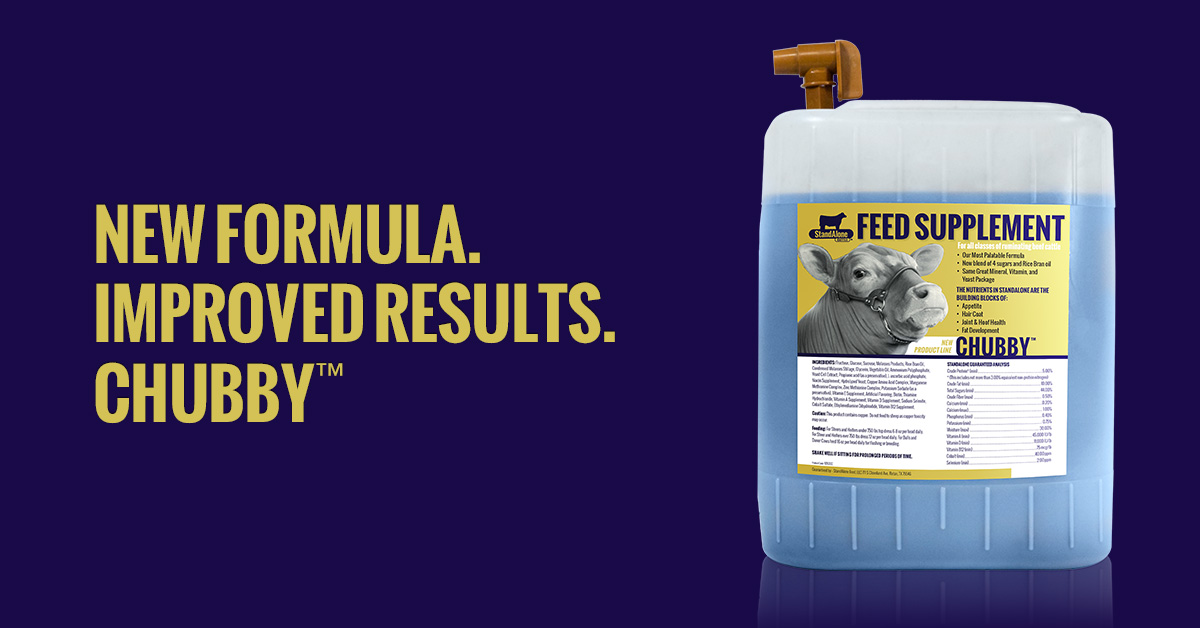