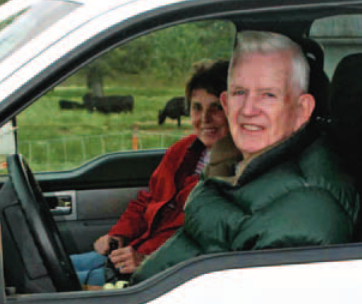 Fort Smith businessman, cattle rancher and quiet philanthropist David McMahon has died. He was 84, and would have been 85 on Saturday (March 26).

He is survived by his wife, Mary Ann, and children Mary Lynn, David Jr., Kathleen, Julie and Susan. Susan McMahon Taylor serves as the president of Belle Point Beverages, and Kathleen McMahon McGuire is the company’s corporate secretary. (A formal obit is posted at the end of this story.)

The beverage distributorship was founded in 1943 by his father Donald, and grew by selling beer to troops training at what was then Camp Chaffee. The business became an Anheuser-Busch distributorship in 1946.

After graduating from Oklahoma A&M (now Oklahoma State University), David served in the military and served in Korea.

His father died in 1965, and David inherited the business. David and Mary Ann began cattle farming in 1956, but expanded the cattle operation in 1975 when they bought the ranch property in Lavaca – recognized by many as the farm with the large silo painted to look like a Budweiser can. The family has held a large Angus production sale every year since 1978. The theme for each sale is “The Great Ones Make It Look So Easy!”

Fred Williams said McMahon was one of the great ones. Williams, founder of Fort Smith-based Williams-Crawford & Associates, and who along with his wife Shirley operate an Angus cattle farm in Crawford County, said he first met McMahon in April 1981.

“And ever since he was one of the best and truest friends I’ve ever had,” Williams said.

Williams said McMahon has a sign in one of his barns that notes, “All the money in the world can’t buy you and a good friend and it can’t pay you for the loss of one.”

Several years ago, and just a few weeks after the tragic loss at an early age of Fred and Shirley’s son Jackson, Williams said McMahon loaded him up on a private plane to attend a cattle sale in Kentucky.

Later in the trip when he confronted McMahon about the priest and the psychologist, Williams said McMahon’s response was, “Well, I didn’t know they were grief specialists.”

“That was him. He was as loyal a friend as you’d ever want,” Williams said.

Bill Hanna, president of Fort Smith-based Hanna Oil & Gas, said McMahon and his father Jim – who passed away in July 2010 – were good friends and part of a hard-working, self-made generation.

“He (McMahon) was old school. … He probably commanded a lot of respect, or really he earned it, by what he did. I love that generation. We’ve all known guys like Dave … they speak their mind and they do things the way they want to do it,” Hanna said.

Hanna and Williams also agreed that McMahon was an early investor and believer in downtown Fort Smith.

“He located downtown at a time when downtown wasn’t the place to be,” Hanna said. “He had a pride in his operation and how it fit in with the riverfront. You can tell a lot about a businessman in how he takes care of his assets.”

Williams also said McMahon and the McMahon family have given much to not just people and organizations in the area, but around the nation.

“He did so much; so, so much. But he would never want anybody to know,” Williams said.

To that point, a November 2011 story for the American Angus Foundation detailed the many ways David and Mary Ann helped grow the educational foundation, including David’s work as co-chair of the “Vision of Value: Campaign for Angus” effort that as of December 2011 had raised $11 million for education, youth and research.

“We are a people business, not just a cow business,” David McMahon said in the story. “America must get better with youth and in education.”