Check out this article on Ray “Bubba” Sorensen son of Mike Sorensen, owner of Livestock Plus Magazine. Ray shows his support for the frontline workers all across Iowa.

“For more than two decades, Iowa artist Ray “Bubba” Sorensen has painted tons of rock in 87 counties and counting.

Iowa is his gallery, and he’s dedicated the space to honoring and remembering military service members.

Eighty-six of the rocks depict scenes that are never-changing and are spread one to a county. Just one, the Freedom Rock in Adair County, is repainted every year just before Memorial Day.

This year’s Freedom Rock scene depicts the frontlines of yesterday and today: On the side that faces the road, Sorensen recreated Joe Rosenthal’s photograph of the raising of the flag at Iwo Jima during World War II in recognition of the event’s 75th anniversary.

He chose the scene after the Marine Corps last year concluded that an Iowan, Harold Keller, was one of the men in that iconic image.” Click Here to Read More 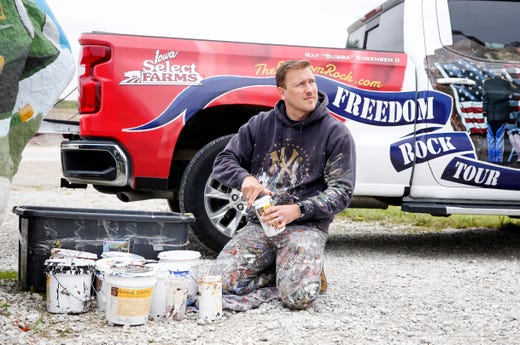 Shared from the Des Moines Register