We spent this past weekend in Lincoln, Ill., showing cattle at the Illinois Junior Simmental Preview show. It was a couple days of fun, friends and cattle, plus three inches of rain on Saturday (not that we’re about to complain about rain; we’re just glad it fell at home, too).

After the heifer show was over, the kids competed in showmanship. And as we stood there and listened, Rensselaer, Ind., cattleman and judge Brad Hanewich dispensed a bit of wisdom that has increasingly struck me as profound.

At the end of the junior division, for kids 8-10 years old, he told them there are two basic ways to show cattle.

Asking the animal to move a foot means you’re guiding it at the halter, pulling forward slightly when you want a foot forward, and pushing back when you want it back. You ask it to do what you want when you gently pull it into position, working with the animal.

You tell them to do something when you poke at their foot with the show stick. “And I don’t know about you, but if somebody stands and pokes my foot over and over without helping me understand what they want, I’m gonna get pretty aggravated,” Hanewich said.

“The best showmen ask their animal to do something.”

And then? He said that piece of advice goes beyond the show ring, too. “You’ll get a lot further in life if you ask someone to do something instead of telling them,” he added.

Well, then. I’d say that’s pretty accurate, on both counts. Solid advice for life, in and out of the show ring.

PS: Jenna and I are off today for the Illinois Beef Association’s first-ever EDGE Youth Conference, where I’ll be talking with young cattle producers about social media…and why their voice is important. Maybe we’ll see you there! 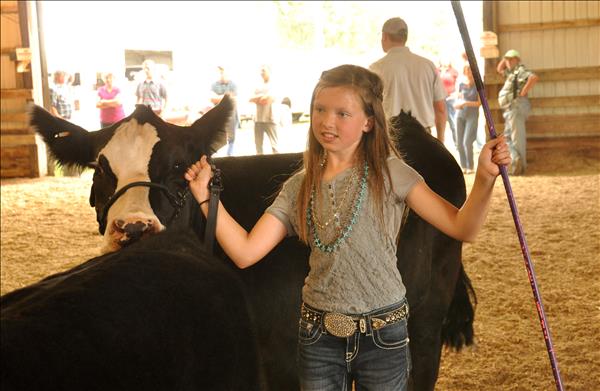 Junior Showmanship Division Champion Emerson Tarr, Leroy, Ill., basked in glowing praise from the judge. Confident, smooth and “eyes like laser beams,” were among his descriptions.