Anissa Brooks is off to a great start when it comes to showing steers, and she gives a large portion of the credit to Stock Show University. Brooks showed at the San Antonio Stock Show early Thursday morning, and walked away with a big smile and a brand after winning the Charolais Lightweight Division. Brooks couldn’t have been more pleased considering that this was her very first major show and her first year showing cattle. 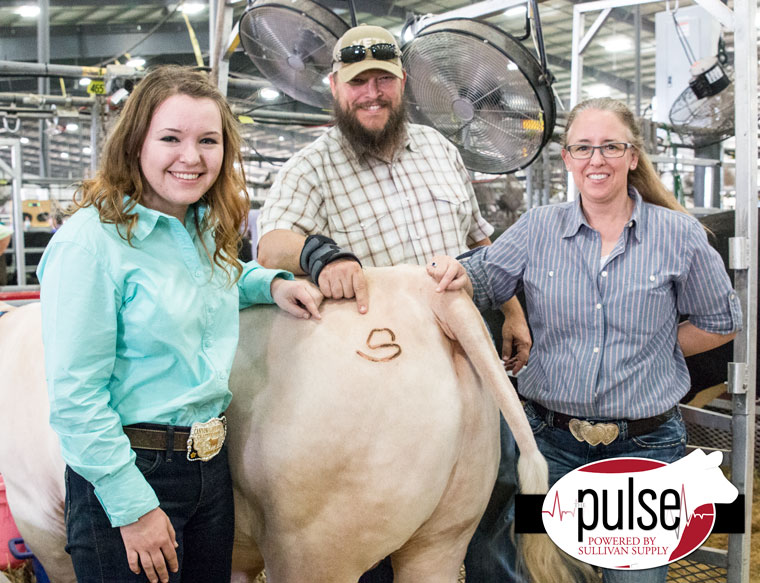 “I just wanted to thank you guys for all that you do. I wouldn’t be where I am today if it wasn’t for Stock Show University getting me on the right track at the very beginning,” says Brooks. Anissa and her parents (Mavinee and Jeff Brooks) picked up their steer and then went to the Grad Program two days later. They had never even put a halter on this steer before unloading at Stock Show U. Brooks says, “I also wanted to mention that our breeder, Carl Tomasik has been a huge help and inspiration right alongside my ag teacher, Amanda Custy!”

Brooks also won Grand Champion Steer and the Senior Showmanship award at her local chapter show, which was another big accomplishment for her. Her favorite thing about showing is the time she gets to spend with her friends, family and animals. “It’s not just about winning, you know, I believe that it is more about the experience and what you can take away from each show versus the Grand Champion banner. Winning is a great bonus, but I’m here to learn and grow,” says Brooks.

Brooks has always wanted to be a veterinarian, but she was never able to take agricultural science classes at her old school in Austin, so the family packed up and moved to Canyon Lake where she joined FFA three years ago. She started out showing pigs but wanted to take the next step and learn as much as she could about the different species, so she took a leap of faith and decided to start showing steers. “The program came at the perfect time! I walked into that arena not knowing a single thing about show cattle, but walked out with a totally different perspective and respect for the industry after learning how to walk, work and be successful in the show ring,” says Brooks.

Brooks is currently a junior in high school and dreams of attending Vet School at Texas A&M University. The whole reason she wanted to get into showing was to learn as much about the animals as possible so that she will be a better vet later on down the road. She is currently the Vice President of the Canyon Lake FFA Chapter and her school’s Student Council organization. She also participates in the Vet Med and Forages CDE’s through FFA. Brooks has been working at the Canyon City Animal Hospital for the last two years and hopes that next year she makes Area VII officer.

The Brooks Family heard about the Stock Show University clinic through Sullivan Supply’s Facebook page. They hope to attend more in the future and recommend them to anybody that wants to go the extra mile. Brooks says, “We also wanted to thank Dan Sullivan and Tyler Trihus for all of their help at Stock Show University!” We hope that this will be the beginning of something great.