Early entries are closed and the numbers are unreal! Late entries are due March 2nd. These deadlines are for ALL SPECIES! Click Here to Make Your Entries

Saturday, March 6th
9 a.m. All Sheep and Goats must be off the grounds.
4 p.m. Barns available for hog exhibitors.

Sunday, March 7th
6 a.m. Barns open.
9 a.m. All Hogs must be in place and weigh cards due for Hogs.
9 a.m. Hog showmanships in age order followed by Prospect, Progress, and Market hog classes in breed order (AOB, Duroc, Hampshire, Yorkshire, Dark Cross and Light Cross). Hogs released after their respective classes and after their pens have been cleaned – be sure to pick up cash premiums before leaving the grounds. 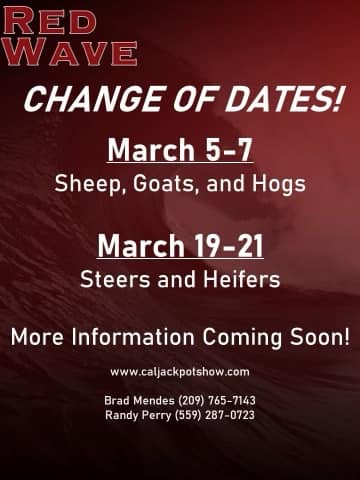