Red Angus Exhibitor uses the NAJRAE to Pay Tribute to a Friend with Cancer.

“You can find people from around the country at the National Red Angus Cattle Show. Kids prepared for the competition on Monday.

One of them is 12-year-old Marie Ford of Bertrand. She’s showing her steer later in the week in honor of a friend who recently relapsed with leukemia.

‘He’s just a really great friend and I know that they’re really in the show business and he is struggling. I just hope he can get better,’ Marie Ford said. 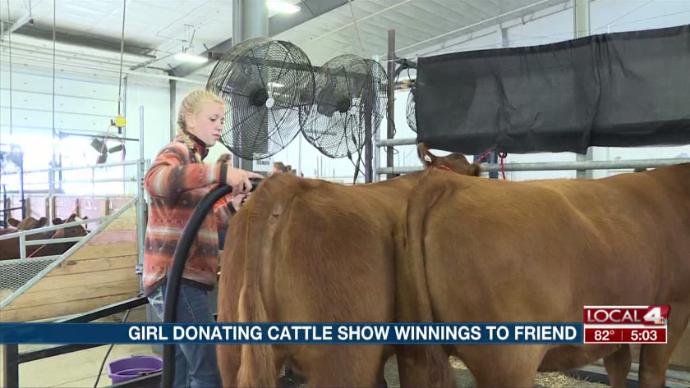 There are 300 participants and 430 head of cattle at the show this year. More than 60 of the kids are from Nebraska.

Ford’s friend, Garrett, was diagnosed with leukemia when he was in the second grade. He planned to show this week, but that changed when he relapsed last year. The steer Ford is showing was originally the one Garrett was suppose to show.

‘He had a bone marrow transplant and he couldn’t show so we bought the steer from him. At county we’ll sell him and all the proceeds will be going to that family,’ Ford said.

Ford will show the steer this weekend. The Red Angus Cattle Show will continue with events this week.”